Transcribed from a hand written article by J.W Tindale, one of the founding members of the club, and Club President from 1951 to 1985.
Using excerpts of the booklet of the History of Rylstone 1820-1988 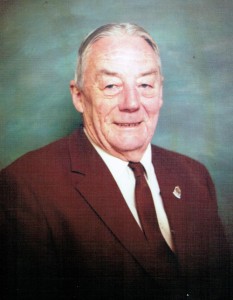 THE RYLSTONE CLUB….. BY J.W.TINDALE

After World War II was finished, the Returned Service Men were invited to join the Rylstone Returned Service League Sub Branch. They held the monthly meetings in the Small Hall at 8 p.m. the first Saturday of the month. It was at one of these meetings that the idea of having their own Club Room was discussed. Several ideas were put to the meeting but no final decision was achieved except that a Committee be formed to seek the possibility of a Club of their own. Six of the new members were selected to form a committee.

At that period, Glen Davis Shale Oil was closing and the people were leaving the site. Kerney’s Butchers Shop, opposite the Police Station, was closing so the committee paid the first two weeks rent for this building out of their own pockets

We reported back to the RSL Meeting and told them what we had done. It was received with reservation, but the meeting approved of our action and gave us the Green Light to proceed.

So now to get some finance:  it was decided to have a Wool Drive. We sent out circulars telling people what we had in mind and we would like the Wool growers to donate a Fleece of Wool. It was a success. Some gave several. Mr. R.E Evans of Dabee gave us one hundred pounds which was a lot of money in those days; anyway we sold the wool which was bringing good money then. So now we had the Building and some finance – next, a working bee to convert a Butchers Shop into a Club Room. This completed, we purchased a few simple chairs,  a 3/4 size billiard table, A S.H domestic fridge, a six penny S.H poker machine from Randwick Business Men’s Club in Sydney, a dart board, some floor coverings, and small items such as glasses etc.

We cleaned out the butchers cool room, which was constructed of timber and insulated with charcoal, painted the walls and fitted a bar counter as one end of the building. Filled the fridge with Mudgee Beer. Beer was rationed and hard to come by but between Mudgee Beer, Lithgow Terry’s Beer and Brittons Beer, we managed to service.

We held RSL meetings there for quite a while until a few members decided they would go back to the Small Hall where they started in 1920. This was disappointing to the Committee we had – we thought they were happy with the Club. So now we were on our own and we changed the name from Rylstone Diggers and Citizens Club to the Rylstone Club.

Things moved along fairly well so we thought it about time to apply for a Liquor license. The Magistrate came and inspected the Building and gave a license the same day as Kandos RSL got theirs. We were able to buy at wholesale now and profit from sales soon allowed us to purchase one shilling Simplex Poker Machine and, soon after, another shilling Simplex Machine. After several years of trading and, our membership growing, it was apparent that we would have to have a bigger Club premises.

The grounds where the Club now stands came up for Auction which we purchased for twenty five pounds. It had a partly demolished stone building and a stable that was used by the Police when they had horses. After it was cleared for the building by a contractor, we decided to try and borrow some finance.

We approached the then NSW Bank and were given the OK if we could get three guarantors. Lew Blackmore, Frank Webdy and Jack Tindale put up their hands. So given the OK, we had to decide on a building and cater for a bowling green to fit on the piece of land. We approached Mudgee RSL Club – who had already built their club – for some guidance how to go about getting a building that would suit. They advised us to contact John Hall, an architect who designed their club. After selecting one of several designs which he presented, we decided on the one of the Club as it now stands without the extension which came later.

William Fuller & Sons built the original portion for seventeen thousand pounds. Having built the club, we had to have a septic system as sewerage hadn’t come to Rylstone and Kandos.

We purchased a Billiard table from Mr. Bill Bennett, a local storekeeper who had a general store where Neil Brodie now has his business. It was in a dismantled state and wrapped up in hessian in about 6 parcels. We got in touch with makers, S & M Moran Billiard Table Manufacturers in Sydney. Sid Moran came by train and assembled it for us. A very moderate sum, his train fare and accommodation for one night. It would be different these times.

The sewerage system came just in time as our septic system was about to fail and the ground became waterlogged.

The Bowling Green was constructed by Mr. Bob Scott, a noted Bowling Green constructor from Corrimal. Also, when finance was available, the Dining Room and Kitchen were added to the club with the latest cooking gear, especially catering for Bowls Special Days and to cater for club functions etc.

After a few more years of successful trading, we were in a position to apply for a loan to build the Squash Courts and extend the Games Room and purchase another Billiard Table. The Squash Courts were built by a local builder Mr. Dimmer Bucan of Rylstone.

During my time as the Foundation President, I was assisted by many keen and dedicated Committee and Staff who helped me greatly and to them I wish to say thank you.

After 34 years, I felt it was time to step down and handed over to Darrell Marchant who carried on until his untimely death in 1992.